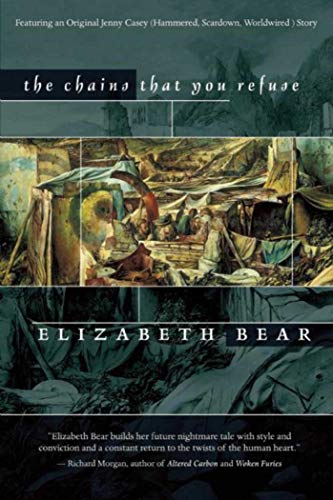 The Chains That You Refuse and Other Stories

Fans of literate fantasy may embrace the 22 inventive tales in Bear's first story collection, but others will be put off by the experimental entries with their nonlinear, often static narratives and extreme emotional detachment. Little happens, for example, in the opening tale, "L'esprit d'escalier: Not a Play in One Act," about a man writing a play about Christopher Marlowe, John Keats and Allen Ginsberg in the afterlife. Bear ( ) is better when forced into the more traditional discipline of the Victorian pastiche with "Tiger! Tiger!" in which the world of Sherlock Holmes collides with that of H.P. Lovecraft. Perhaps the most successful story is "Seven Dragons Mountain," which mixes Chinese dragons and airships, but again a clever idea could have benefited from a more gripping execution.