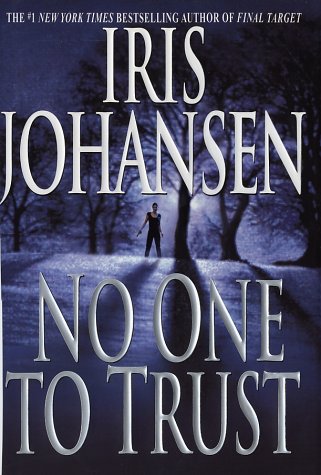 NO ONE TO TRUST

Think Linda Hamilton in and a jaded James Bond, and you've got the principals down pat for crowd-pleaser Johansen's () latest romantic suspenser. Elena Kyler was born in Colombia and raised by her rebel fighter father, formerly an American mercenary. After her father dies and her rebel comrades sell out to druglord Rico Chavez, Elena, now in her mid-20s, concocts a desperate plan to save herself and her five-year-old son Barry from Chavez, who also happens to be Barry's father. She contacts the DEA, who call in the Bondian Sean Galen, a debonair maverick. The plan is to bring Elena and Barry to the U.S., then capture Chavez when he comes for his son. After a daring air-lift escape, Sean, Elena and Barry make it to California, but an ambush by Chavez's men leaves them running for their lives. Unaccustomed to relying on the kindness of strangers, Elena finds herself forced to lean on Sean as the two zigzag across the U.S., falling in love along the way. In the current climate, the threat of drug cartels feels dated and Chavez is such an over-the-top nasty that he's downright silly. Add to that a melodramatic anti-heroine, who's also a clichéd assassin-with-a-heart-of-gold seeking spiritual redemption, and a Southeastern climax that's as '80s as , and the sum total becomes a derivative stew. Johansen has delivered better in the past and hopefully will again in the future.