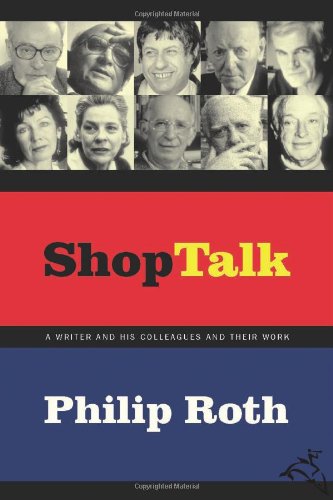 SHOP TALK: A Writer and His Colleagues and Their Work

Roth continues to be feverishly productive after vaulted him back onto the novelists' A-list in the late '90s, and last year's kept hiim there. This book is a grab bag of conversations and exchanges of letters with other writers, and essays, which originally appeared in the , the, the and . Among his correspondents are Primo Levi and novelists Aharon Appelfeld, Isaac Bashevis Singer, Edna O'Brien and Milan Kundera. In none of these conversations does the reader get a clear picture of both parties, since Roth's overlong questions and self-referential statements rarely turn the spotlight away from himself, and most of the chatter is about writers' status and career, rather than artistry or real "shop talk." Czech novelist Ivan Klima is coarsely described as resembling "a highly intellectually evolved Ringo Starr." There is an abstruse and cryptic pair of letters exchanged with Mary McCarthy, and a merciless memoir of novelist Bernard Malamud, who when dying read aloud the beginning of a new novel written with immense difficulty, only to have Roth pick holes in the work: "Trying to be constructive, I suggested that the narrative opened too slowly and that he might better begin further along.... " Collections and individual readers would do better to buy copies of the novels from decades ago that established this writer's fame than look here for unplumbed depths.