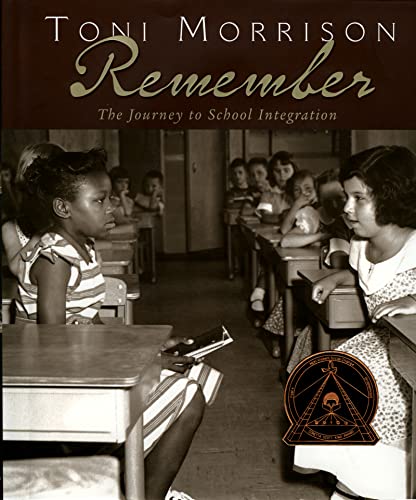 REMEMBER: The Journey to School Integration

Assembling more than 50 photographs depicting segregation, school scenes and events prior to and following the 1954 Supreme Court ruling on , Morrison ( ) writes that "because remembering is the mind's first step toward understanding," her book is designed to take readers "on a journey through a time in American life when there was as much hate as there was love." She adds, she has "imagined the thoughts and feelings of some of the people in the photographs to help tell this story." The photographs have a uniformly high impact. Some will be familiar: first-grader Ruby Bridges escorted by U.S. marshals from a newly integrated school; white adults' faces contorted with rage as they heckle black students. Against this disturbing backdrop, perhaps the most striking images are the rare moments of unguarded affection, as when a black girl and a white girl smile candidly at each other in a high school cafeteria. However, it's odd to see words invented for Ruby Bridges, who has told her own story elsewhere, and for other public figures; and not all the imagined words ring true (e.g., beneath a photo of three white teens wearing signs protesting the integration of their high school: "My buddies talked me into this.... These guys are my friends and friends are more important than strangers. Even if they're wrong. Aren't they?"). Odd, too, is the decision to put events that lead up to integration (the bus boycott, lunch counter protests) out of sequential order. In the end, the pairing of the fictional text with the historical photographs poses a problem: how much is the audience asked to "remember" and how much to "imagine"? All ages.