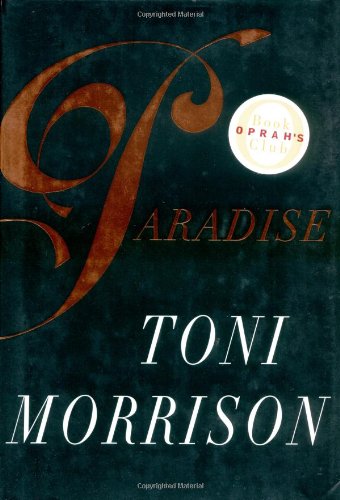 So intense and evocative in its particulars, so wide-ranging in its arch, this is another, if imperfect, triumph for the Nobel Prize-winning author (Song of Solomon; Beloved; etc.). In 1950, a core group of nine old families leaves the increasingly corrupted African American community of Haven, Okla., to found in that same state a new, purer community they call Ruby. But in the early 1970s, the outside world begins to intrude on Ruby's isolation, forcing a tragic confrontation. It's about this time, too, that the first of five damaged women finds solace in a decrepit former convent near Ruby. Once the pleasure palace of an embezzler, the convent had been covered with lascivious fixtures that were packed away or painted over by the nuns. Time has left only ""traces of the sisters' failed industry,"" however, making the building a crumbling, fertile amalgam of feminine piety and female sexuality. It's a woman's world that attracts the women of Ruby--and that repels the men who see its occupants as the locus of all the town's ills. They are ""not women locked safely away from men; but worse, women who chose themselves for company, which is to say not a convent but a coven."" Only when Morrison treats the convent women as an entity (rather than as individual characters) do they lose nuance, and that's when the book falters. Still, the individual stories of both the women and the townspeople reveal Morrison at her best. Tragic, ugly, beautiful, these lives are the result of personal dreams and misfortune; of a history that encompasses Reconstruction and Vietnam; and of mystical grandeur. 400,000 first printing; simultaneous audio and large print editions (ISBN 0-375-40179-2; -70217-2) (Jan.)
close
Details