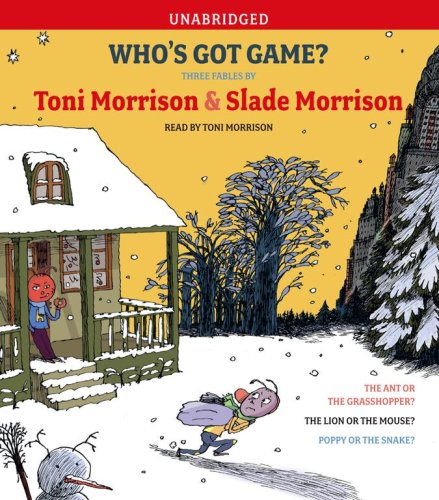 Renowned novelist Morrison delivers her hip-hop–inspired interpretations of three of Aesop's fables (previously published as picture books, co-created with her son) in a gentle, melodious style. In "Who's Got Game?: The Grasshopper or the Ant?," Kid A, the ant, and Foxy G, his grasshopper pal, don't see eye-to-eye on their work ethic. But Grasshopper's artistic dreams may have listeners pondering what it means to give and take. Lion and Mouse experience a bit of role reversal when the smaller creature removes a thorn from the king of the jungle's paw in "Who's Got Game? Lion or the Mouse?," and snakes will be snakes in "Who's Got Game? Poppy or the Snake?" When a grandfather affectionately known as Poppy runs over a snake, the slithering creature craftily guilts the man into making amends. But when the snake eventually bites the hand that helps him, Poppy is prepared. Listeners of all ages will savor these familiar stories with a fun twist, especially as performed here with easygoing panache. Ages 6-up.