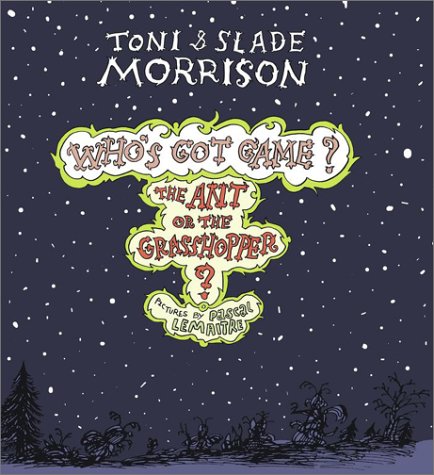 WHO'S GOT GAME? THE ANT OR THE GRASSHOPPER?

Aesop's freewheeling Grasshopper and industrious Ant become "Foxy G and his ace Kid A" in this witty, hip-hop–inspired update by the Morrisons and Lemaître (who previously teamed up in ). In comic-book panels and voice bubbles, snazzily hand-lettered by the illustrator, the friends rhyme and loaf in a Brooklyn-esque bug city. Kid A, a slouchy orange insect, loves hanging out and shooting hoops with Foxy G, a talented singer who rubs his gray wings to make music. But "one hot day/ as they lay in the shade/ Kid A turned to his friend and said:/ Got to split, Foxy. The summer's been fun./ Time to dump this place, get back in the race./ There's a lot of work to be done." Foxy thinks creativity is more important. "I have to ," he brags as Kid A leaves. Kid A dances to Foxy's tunes while he does his chores, but when winter comes, he munches a doughnut while Foxy begs for a crumb. "I quenched your thirst/ and fed your soul/ you can't spare me/ a doughnut hole?" Foxy asks in disbelief. He makes a case for the artist's role in society, but at the ambiguous conclusion, he still shivers in the snow. The authors wisely leave it to readers to answer the title question. Similarly, in the revised fable (-2248-2, released simultaneously), a boastful king of beasts gets a thorn in his paw and lets a timid mouse pull it. Afterward, the two reverse roles; the lion learns humility, but the mouse becomes a power-mad bully. Once again the audience must decide "who's got game," or who's in the right. Both retellings—especially the shrewd portrait of the musician—score slam dunks. All ages.