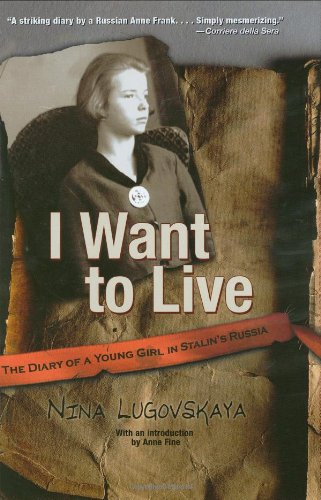 I Want to Live: The Diary of a Young Girl in Stalin's Russia

In this revealing diary, 13-year-old Nina Lugovskaya gave a true account of her life during Stalin's Great Terror. Nina's diary begins on October 8, 1932 and continues as she records her observations about school, friends, crushes and her family life, along with angry commentary about Stalin's restrictive regime: “Today they herded us out to march around the streets, which made me absolutely furious.... Walking over the cold, gray ground in the damp, dull light of an autumn day... and cursing Soviet power to myself.” Her family was subjected to constant raids by the NKVD (Stalin's secret police) because of her father's involvement in the Socialist Revolutionary Party. She was cruelly teased by classmates because of her lazy eye and her academic struggles made her depressed—suicide is a topic she revisits throughout her diary. Nina's final entry occurs on January 3, 1937; the next day her diary was confiscated during a raid by the NKVD. During intensive interrogation, Nina (falsely) confesses to a plot to assassinate Stalin and she, her mother and twin sisters are sentenced to five years of hard labor in Kolyma prison camp, where they miraculously survived; Nina herself worked as an artist and lived until the age of 74. Lugovskaya's diary, which was found in the NKVD archives, stands as a compelling historical artifact and Nina's story gives a moving—if relentlessly melancholy—personal account of life in Communist Russia. Ages 12-up.