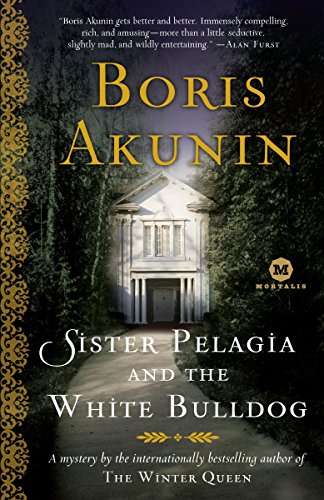 Sister Pelagia and the White Bulldog

Set in the late 19th century, this charming, highly unusual whodunit from Russian author Akunin (the pen name of Grigory Chkhartishvili) introduces Sister Pelagia, a young nun in a remote Russian province far removed from the intrigue of the czarist government. Pelagia's bishop, who has discreetly and successfully employed her deductive skills before, calls on her when an uncommon white bulldog belonging to his aunt is poisoned. After the nun's arrival on the scene, the two remaining dogs in the breeding line turn up dead, leading Pelagia to suspect the killings are actually an indirect attempt to murder their wealthy mistress, whose devotion to the animals is legendary. Akunin's gently humorous omniscient narrative voice distinguishes this novel from other historical mysteries. Even admirers of Akunin's Erast Petrovich Fandorin series ( , etc.) will appreciate the author's switch to another, even more memorable sleuth.