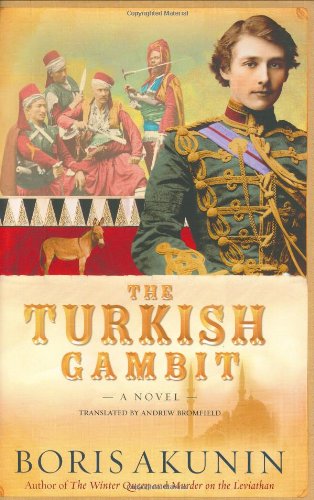 If chatty digressions on love and war tend to slow the third Erast Fandorin historical to appear in the U.S. (after 2004's ), Russian author Akunin does a superb job of rendering the immediacy of battle in the 1877–1878 conflict between the Motherland and Turkey, and illuminating the politics behind czarist fantasies of recapturing Constantinople. At the Balkan front, the quiet, stuttering Fandorin befriends Varya Suvorova, a midwife turned telegraphist. Varya is bent on visiting her court-martialed fiancé, who's accused of being a spy. Fandorin and Varya are soon caught up in the fortunes of the Russian army, which a well-placed mole seems intent on betraying. Suspicions point to various Russian staff officers and to some glamorous foreign correspondents, including Seamus McLaughlin from London's and Michel Paladin from the . Codes, courtesans and love letters all come into play, as well as murder and suicide in combat, in a plot more complex than some West Point battle plans. While the plethora of minor characters can be confusing, the quirky Fandorin and determined Varya stand out amid the turmoil of their surroundings.