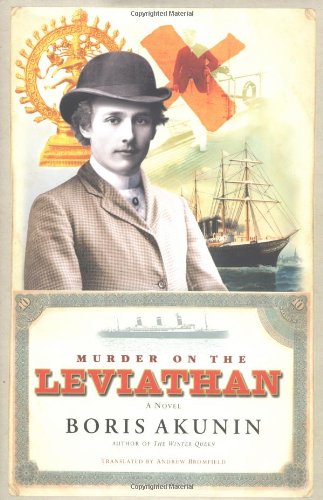 MURDER ON THE LEVIATHAN

Akunin writes like a hybrid of Caleb Carr, Agatha Christie and Elizabeth Peters in his second mystery to be published in the U.S., set on the maiden voyage of the British luxury ship , en route to India in the spring of 1878. Akunin's young Russian detective/diplomat protagonist, Erast Fandorin, has matured considerably since his debut in last year's highly praised , set in 1876, and proves a worthy foil to French police commissioner Gustave Gauche, who boards the because a clue suggests that one of the passengers murdered a wealthy British aristocrat, seven servants and two children in his Paris home and stole priceless Indian treasures. The intuitive, methodical Fandorin, who joins the ship at Port Said, soon slyly takes over the investigation and comes up with an eclectic group of suspects, all with secrets to hide, whom Gauche assigns to the same dining room. The company recite humorous or instructive stories that slow down the action but eventually relate to the identification of the killer. Gauche offers at least four solutions to the crimes, but in each case Fandorin debates or debunks his reasoning. The atmospheric historical detail gives depth to the twisting plot, while the ruthless yet poignant arch villain makes up for a cast of mostly cardboard characters. Readers disappointed by the lack of background on Fandorin will find plenty in .