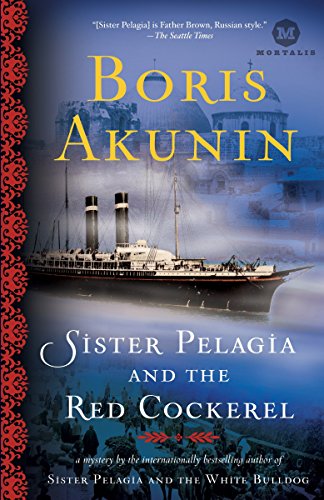 Sister Pelagia and the Red Cockerel

After the brilliant triumph of 2008's , Akunin's third and final Sister Pelagia mystery disappoints, in part because the 19th-century nun has little opportunity to display her deductive skills. Pelagia's use of her intellectual gifts for crime-solving draws the censure of St. Petersburg's Chief Procurator of the Holy Synod, who believes she may be unfit to continue to wear the veil. Later, when someone bashes in the head of Manuila, the messianic leader of a rogue Jewish sect, aboard a steamboat on which Pelagia happens to be a passenger, her observations prove useful to the investigating officer. After several attempts on her life, she's shipped off to Palestine, where she continues to look for the truth behind Manuila's murder. In Palestine, she fends off a number of suitors, behaving less like a woman of faith with insights into human nature than a damsel in distress.