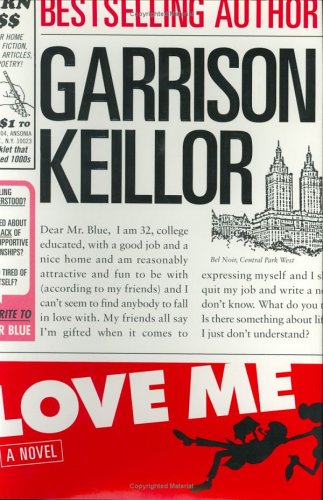 An obscure Minneapolis writer is touched by the "kiss of fame" in Keillor's latest, a sly romantic comedy-cum-literary satire that begins when Larry Wyler's first novel, , takes off and hits the bestseller list. Wyler longs to accept an invitation to go to Manhattan and work for the , but his earnest, stodgy wife, Iris, is content to stay in St. Paul and continue her work with the elderly. The siren song of New York proves too strong for Wyler, though, and the writer reports to legendary editor William Shawn and rubs elbows with the likes of Updike and Salinger. But publisher Harold Ross has been succeeded by a mafioso called Tony Crossandotti, who forces Wyler into a deadly showdown after the hapless writer fails to get a poem published for the thug. In an equally cheeky storyline, Wyler begins writing an advice column for a Minneapolis paper when his work at the flags and his second novel tanks, and Keillor uses the conceit to pen a series of running letters from various lovelorn characters who call on "Mr. Blue" to help sort out their lonely lives (reprising his real-life turn as an advice columnist for the online magazine ). The material on Wyler's up-and-down relationship with Iris is less successful, although Keillor's prose does turn touching down the stretch when they reconcile and put Wyler's numerous infidelities behind them. With his trademark droll humor, Keillor exposes the foibles of human nature and pokes fun at our more absurd conventions. The icing on the cake is the use of some obviously autobiographical material from Keillor's publishing experiences in this wry send-up of literary life.