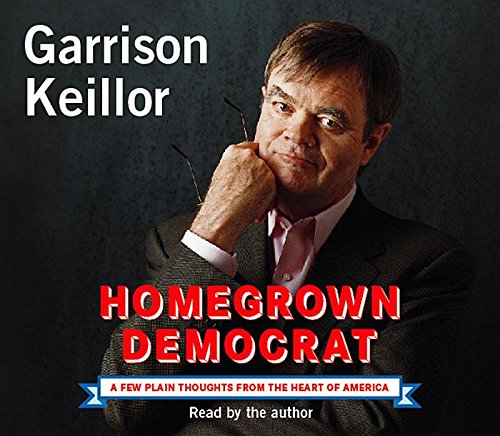 HOMEGROWN DEMOCRAT: A Few Plain Thoughts from the Heart of America

Characteristically soothing and lyrical, Keillor's voice takes on an almost preachy tone in this polemic against the "hairy-backed swamp developers and corporate shills" that he feels populate the Republican party. Though Democrats will laud the points he scores against the Bush administration and Republicans in general, Keillor's presentation suffers from too much emotion, coupled with a more rigid adherence to the script than he usually observes in his Lake Wobegon stories ( , etc.). One of the audiobook's joys comes when Keillor uses multi-syllabic, pleasingly perverse language à la Charles Dickens to convey the deeds of Republicans, whom he views as slimy, odious characters working to fashion a world where people live in fear, only venturing out of their homes in giant cars to gather supplies in the nearest mall. Keillor's trademark dreaminess resurfaces, however, when he returns to familiar ground and offers up his Minnesota boyhood as a case study of the benefits of voting for the Democratic ticket. Kind but strict parents and a decent public education all served Keillor well, and he sees these things as a cure-all for society's ills. Though this one-size-fits-all answer won't sit well with some listeners, Keillor's likeminded fans will enjoy hearing his passionate take on politics.