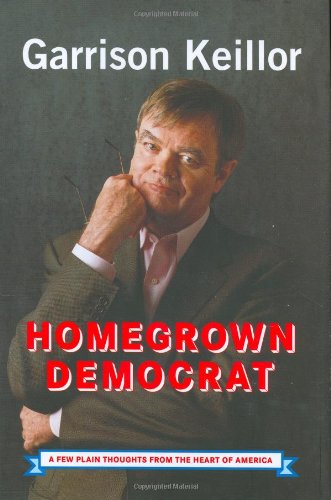 HOMEGROWN DEMOCRAT: A Few Plain Thoughts from the Heart of America

His Minnesota boyhood and the putative values of his state allow novelist and NPR favorite Keillor to conjure up a heartwarming case for liberalism, if not necessarily the Democratic Party platform. "[T]he social compact is still intact here," he writes of life in St. Paul, summing up attacks on that compact in a Menckenesque rant: "hairy-backed swamp developers and corporate shills, faith-based economists...." Liberalism, Keillor declares, "is the politics of kindness," and he traces his own ideology to his kindly aunts and his access to good public education, including a land-grant university. Though he criticizes Democrats for losing touch with their principles, as when they support the drug war, he catalogues "What Do-Gooder Democrats Have Done for You," from civil rights to clean air, though he acknowledges, "The great hole in the compact is health care." "The good democrat," he declares, distrusts privilege and power, believes in equality, supports unions, and is individualist—"identity politics is Pundit Speak," he notes, which might get him in trouble with some interest groups. "Democrats are thought to be weak on foreign policy... but what we fear is arrogance," he writes, in a chapter notably short on prescription. Near the end, he offers another potent monologue, if not a rant, about September 11 and Bush's "Achtung Department" (aka Homeland Security). It doesn't all hang together—heck, Keillor's so loosy-goosey, he begins most chapters with a limerick—but call this meets Air America.