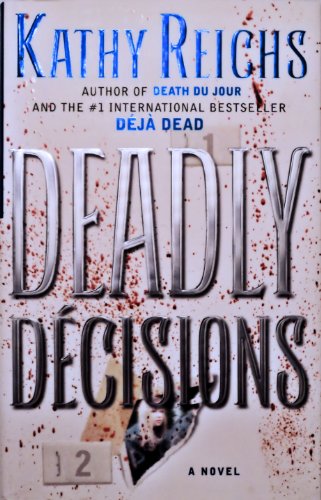 Critics (and publicists) often compare Reichs to Patricia Cornwell, as both are women who write bestselling thrillers featuring a female forensic expert. There's a significant difference between them, though. Reichs brings to her grisly novels a scientific detail and authenticity that Cornwell rarely matches--a virtue arising from Reich's background as a top forensic anthropologist for the governments of North Carolina and Quebec, a background mirrored by that of her heroine, Tempe Brennan. But Cornwell--a journalist before she turned novelist--is a more accomplished writer than Reichs, and her more fluid prose and plotting support a heroine who exudes a vitality that Brennan doesn't. Reichs's strengths and weaknesses are apparent in this third novel (after Death du Jour) featuring narrator Brennan, which finds the crime fighter tangling with outlaw motorcycle gangs in Montreal. The novel opens as Brennan, ""sorting badly mangled tissue"" in an autopsy room, is interrupted by the arrival of another body: that of a girl, nine, caught by a bullet that one gang, the Heathens, had intended for a rival Viper. The mangled tissue belongs to two Heathens who'd been en route to bomb the Vipers' headquarters: war is raging among bikers in Montreal, and Brennan is soon caught in the battles, not least because her visiting nephew, Kit, is enamored with bikers--including some involved in the war. The narrative carries Brennan to assorted bikers' hangouts, and to much forensic digging, all of which Reichs handles with an admirable intensity and veracity. Still, the novel has a stiff, storyboarded feel, with a subplot involving Brennan's cop lover--has he turned gang member?--particularly intrusive. The pacing is lopsided, laborious in front and action-stuffed at the back, and the narrative spreads its message about the malfeasance of outlaw bikers with a heavy hand. Overall, the novel works, but the gears show one time too many. Agent, Jennifer Rudolph Walsh at the Writer's Shop. Major ad/promo; 6-city author tour. (July)
close
Details