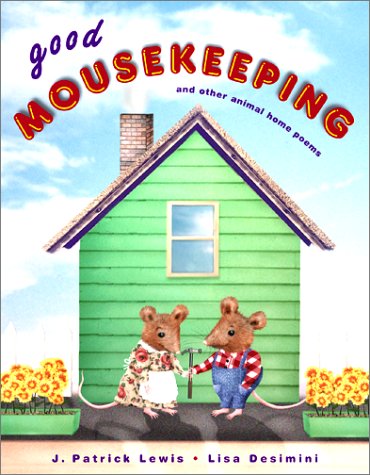 Lewis eschews the conventional approach to books about animal houses and imagines instead what sorts of dwellings different animals would choose if they lived "on a street with all of the/ Creature comforts." The Dragon's home thus "has warmth and charm,/ Four sprinklers and a/ SMOKE ALARM!" and a "house that suits a Polar Bear/ Has very, very central air." Unfortunately, with the exception of the longer title poem, "Good Mousekeeping," these brief verses are less energetic and clever than the poems in Lewis and Desimini's Lines seem padded to create the rhyme, and Lewis's puns and wordplay generally lack the dexterity of his previous work ("A house would make/ A Bullfrog hopping mad/ If it did not come with/ A launching pad"). Desimini's inventive, computer-enhanced mixed-media collages yield the greater wit and humor. A house meant for a porcupine, for example, is shaped like the familiar red tomato pincushion with button eyes and porcupine quill needles. The turtle (who likes "a humble home/ To match his geodesic dome") inhabits a coconut shell which is split in two, half an igloo-shaped house and the other half a milky swimming pool. Humorous details, such as a framed picture of two ears of corn hung above a pig's loveseat, compensate for the inconsistencies of the poems. Ages 4-8.