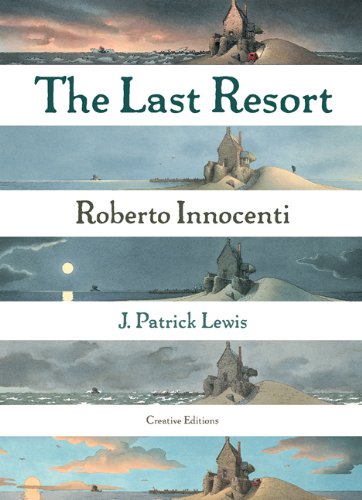 When an artist's imagination, "apparently angry at being ignored, took a holiday," the artist goes after it, in Lewis's () unusual tale. Deposited by his red Renault (which "seemed to know the way") at a seaside hotel, the artist is told "This here's The Last Resort for folks who've lost a piece of mind." There he encounters a strange parade of fellow guests, some of whom seem strangely familiar…. The clues are legion; a few are easy to spot (such as Long John Silver, who "peglegs in here, signs the guestbook with crossbones"), others will keep even sophisticated readers guessing until the final pages on which their identities are revealed. The lineup includes poets, characters from novels (including Melville's white whale), an actor who "had lost his range of emotions" (Peter Lorre) and more, all of whom eventually find their lost inspiration. Lewis's colorful and imaginative prose ("blues and whites quilted the sky") will keep readers' attention, despite the meandering story line and occasionally affected tone ("The patrons of The Last Resort had shown the road to self-discovery!"). Innocenti's artwork consistently soars. His series of detailed, playful vignettes tweak perspective and brim with arch humor (as when he reveals the Little Mermaid's identity in a page divided into four moonlit quadrants), and his spreads offer the kinds of details found in the illustrations of vintage Victorian children's books. This elegantly designed volume will be most appreciated by bibliophiles and aesthetes: the artwork is spectacular. Ages 9-up.