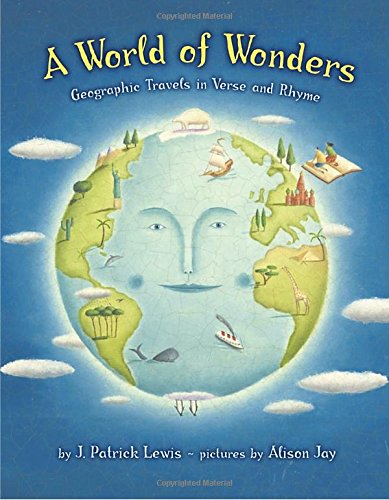 A WORLD OF WONDERS: Geographic Travels in Verse and Rhyme

In Lewis's () witty and fact-filled collection of poems, the narrator of the opening poem urges readers to "Discover the world of GE-OG-RA-PHY!" and recommends "traveling by poem." The poet examines not only the explorers (Christopher Columbus, Ferdinand Magellan, etc.) themselves, but enough odd places and names to intrigue and tickle young readers. He offers a series of riddles about famous cities and facts about the globe ("Did you know [that] 27 Eiffel Towers and Mount Everest are equally tall?") as well as helpful mnemonic devices (e.g., in "How a Cave Will Behave": "A stala tite drips down from the eiling./ A stalamite grows up from the round"). Lewis's verbal somersaults, both whimsical and plentiful, pepper the volume. As two men sit on a hilltop watching the aurora borealis, the speaker sees "clouds go by/ in colored thunderwear"; another tells of an "Archie fellow that I know/ [who] lived on an archi-pel-ago." But he and Jay () also convey a sobering message in "Two Animals Talking": a boy says to a beetle, " 'Behold all we have conquered, and/ The continents we've crossed!'/ 'But since you always win,' said Beetle,/ 'What have others lost?' " as the artwork shows a dark billowing cloud from a smokestack and a man chopping down a tree. The artist's many bird's-eye views brim with easy-to-recognize landmarks. She overlays each illustration with a crackle-glass web of lines. A full-scale treat for the armchair traveler. Ages 5-up.