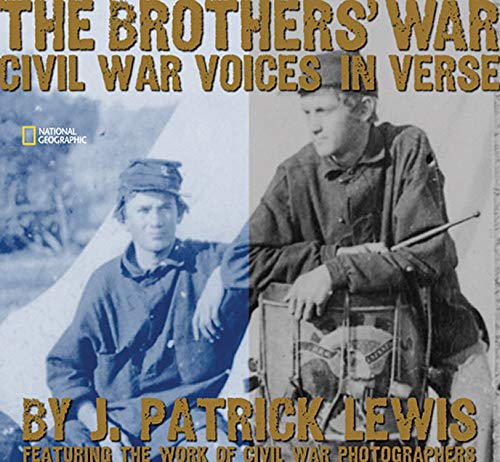 This heartrending collection of original poems paired with photographs by Civil War photographers makes real what statistics about war cannot—that the casualties of any war have human faces. Lewis ( ) writes poignantly and lyrically: “In the bloody Battle of Seven Pines,/ a young soldier, Absalom Flowers,/ whose mother baked the most delicious cobbler/ in Roanoke, whose father was nothing really,/ stopped a Union bullet with his face” (from “Boys in a Brothers' War”). An elegant design of gold, silver and black handsomely frames the text and the photographs, declaring the importance of the subject and setting a respectful tone. An introduction, detailed photo captions and back matter ground readers in the historical context, while the poems and photos recreate the emotional reality. The poem “Passing in Review,” for example, is juxtaposed with a photograph of a soldier amputee who stares into the camera's lens. The poem's narrator comments, “A war churns boys to men./ Remember them/ Today, deceased,/ Young men-at-arms who would increase/ By inches some foothold on peace.” Lewis includes supposed accounts by John Brown and Frederick Douglass, letters from soldiers to their families, and a narrative by a runaway slave. An exemplary work. Ages 10-14.