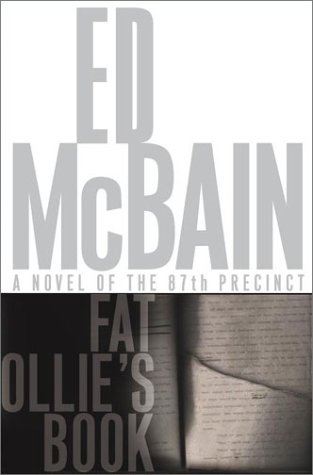 FAT OLLIE'S BOOK: A Novel of the 87th Precinct

Even when MWA Grand Master McBain (aka Evan Hunter) isn't in top form, he is very good and such is the case with this 87th Precinct novel, which really belongs to Det. Oliver Wendell Weeks of the 88th Precinct. Fat Ollie, of the gross appetite and the even grosser ignorance of political correctness, played a surprisingly heroic role in the last 87th Precinct novel, (2001). Now he claims star billing and repayment of a debt owed by Det. Steve Carella. Two major crimes occur at almost the same time: the shooting of Councilman (and possible mayoral candidate) Lester Henderson as he is getting ready for a rally and the theft of the just completed manuscript of Ollie's first novel, . Ollie enlists Carella's help (Henderson lived in the 87th) and pursues both the murderer and the thief. McBain's broad humor is much in evidence as he pokes fun at detective novels and their readership through excerpts from Fat Ollie's ponderous book. On the other hand, Ollie's outrageous bigotry, like that of TV's Archie Bunker, never seems to hurt or offend anyone and palls over an entire novel. Still, McBain creates wonderfully strange characters, like the transvestite hooker who latches on to Ollie's book, and crimes that are somehow ingenious, stupid and utterly convincing.