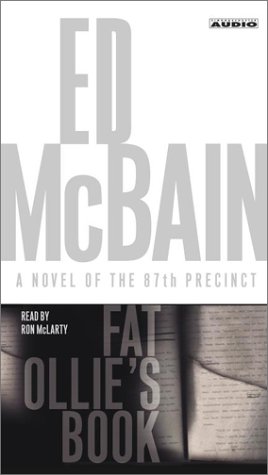 FAT OLLIE'S BOOK: A Novel of the 87th Precinct

Fans of the Berenstain Bears audiobooks are in for a shock when they listen to McLarty's performance here. Instead of reading the voice of Papa Bear (which he's done for numerous Berenstain Bears audios), McLarty portrays Oliver Wendell Weeks, a hard-boiled detective in the 88th precinct. A slob and an equal opportunity racist (he hates everyone), Ollie has written a novel, , which is stolen from his car while he's investigating a murder. Ollie is more concerned with solving the theft than the murder—it was the only manuscript, typewritten (he doesn't know a thing about computers). The thief, unbeknownst to Ollie, has read the book and believes it's an actual report to the Commissioner, full of valuable information, such as the location of a large quantity of fictional diamonds. McLarty's reading is on the money. He plays Weeks with the lovable gruffness of one of Ollie's idols, W.C Fields, and fleshes out, with equal doses of gravelly humor and punch, the rest of characters in this surly yarn, from McBain regulars Carella and Kling to a thieving, cross-dressing, Hispanic junkie prostitute.