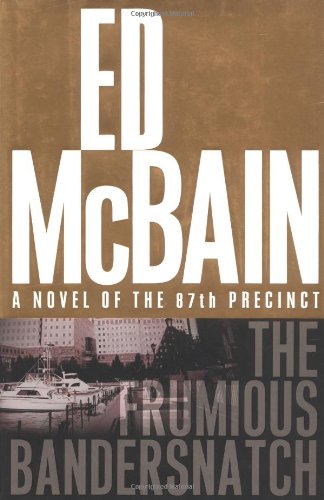 THE FRUMIOUS BANDERSNATCH: A Novel of the 87th Precinct

Amazingly, MWA Grand Master McBain remains as fresh and sharp-edged as ever in his 53rd 87th Precinct novel (after 2003's ), which takes on the culture of celebrity. Bison Records' self-styled impresario Barney Loomis runs into a snag in his effort to catapult his newest performer, Tamar Valparaiso, to stardom. As Tamar is lip-synching the provocative video of her first album aboard a rented yacht, two men in Saddam Hussein and Yasir Arafat masks snatch her before a stunned audience. With his usual expert pacing, McBain alternates the action among a number of characters, including the kidnappers and Tamar; series stalwart Steve Carella, who must endure political maneuvering within a Joint Task Force of police bigwigs and FBI agents; and misogynist Ollie Weeks and his new amour, Det. Patricia Gomez. McBain injects enough humor to leaven the underlying tragedy—the fate of a vulnerable, talented young woman. Although it's soon obvious who's behind Tamar's kidnapping, we don't read McBain for surprising denouements but for his true-to-life dialogue, skill at defining characters and effortless transitions. The Lewis Carroll theme provides an extra level of enjoyment.