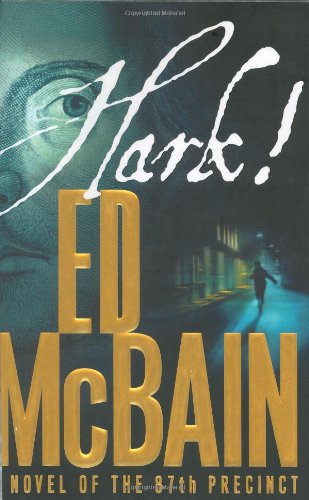 HARK! A Novel of the 87th Precinct

Recovered from his wounds, the Deaf Man is bent on revenge and determined to rub the collective face of the 87th in the dust of his brilliance in McBain's latest zany romp. After striking first at the woman who betrayed him, the Deaf Man turns to taunting the 87th with cryptic hand-delivered messages (quotes from Shakespeare or anagrams) that are interpreted or misinterpreted with hilarious results. The saga of Fat Ollie's book, which began in (2003) and continued in (2004), resumes and promises to have a long life of its own. There are a lot of soap opera flourishes to the personal relationships of the 87th crew, and McBain milks them for humor and pathos. Steve Carella faces paying for the double wedding of his mother and his sister. Bert Kling knows his beautiful surgeon girlfriend is cheating on him. Cotton Hawes and his glamorous TV news girlfriend, Honey Blair, are under attack, but which one is the real target? It's vintage McBain, complete with pitch-perfect dialogue, subplots that thrust various precinct cops into the spotlight, a pace that encourages the reader to forget about dinner or a good night's rest, and a plot that teases and tantalizes from start to finish.