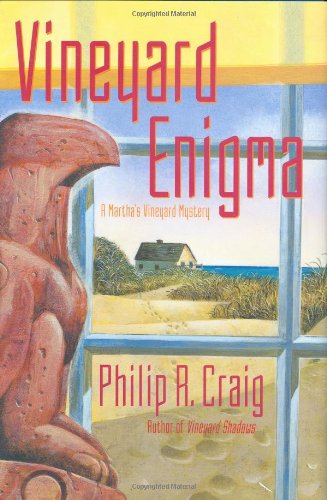 Former Boston cop J.W. Jackson searches for two ancient soapstone eagles allegedly stolen from African ruins, as well as for clues to his wife Zee's sudden detachment, in Craig's latest Vineyard mystery, a livelier, more original tale than his previous, 2001's . Abraham Mahsimba, a cultivated and attractive African, may have given J.W. a fresh mission (and a new interest in priceless artifacts), but he's also struck Zee's fancy. A naked, headless and unidentified body and the murder of an art dealer complicate life on the island, and J.W. soon finds himself amid a thriving trade of stolen artifacts, a personal rivalry between collectors and a potential revenge plot. Eccentric locals—a Native American couple, a distinguished art collector, a reluctant accountant and assorted nouveau riche islanders—add zest. Craig offers enough liaisons, infidelities and questionable loyalties to keep everyone guessing. Does Mahsimba really work for Interpol, or is he after the eagles for selfish reasons? Will Zee fall victim to the seven-year itch? Another murder and an attempt on J.W.'s life leave our hero wary but still committed to getting to the bottom of things, which he does as the tale picks up speed and races toward a satisfying if uninspired conclusion. The Vineyard—with its fishing, clamming, cooking and camaraderie—retains its allure, the Red Sox are on a roll and J.W.'s homely philosophizing continues to annoy or enchant, depending on taste.