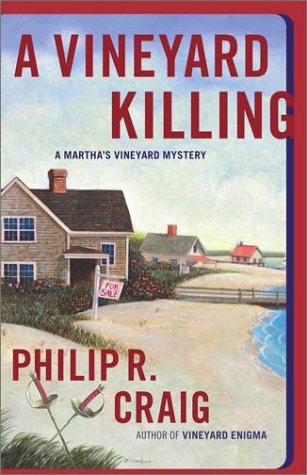 This absorbing yarn, the 14th in Craig's series set on Martha's Vineyard, portrays an island unknown to most visitors, cold and raw with a March wind biting instead of fish. Retired Boston policeman and part-time PI J.W. Jackson and his wife, Zee (whose head was turned by another man in last year's ), are enjoying an off-season lunch with friends at a Vineyard Haven deli when shots ring out in the street. Someone has tried to kill Paul Fox, brother of unscrupulous real-estate tycoon Donald Fox. The odd thing is, Paul was wearing a bulletproof vest, as if he were expecting serious trouble. Donald Fox, who's been buying up land with questionable titles and threatening island residents, may have been the intended target. In his search for answers, J.W. encounters some nasty thugs among the familiar cast of diverting locals, from the "keep out of this" police chief to the chief's sassy assistant. Island incidentals include fencing, fishing and firearms, along with the usual complaints about tourists. J.W.'s homely philosophy and a subtle theme of loyalty add depth. Well-constructed and well-paced, with humor and suspense, this outing shows Craig in fine form.