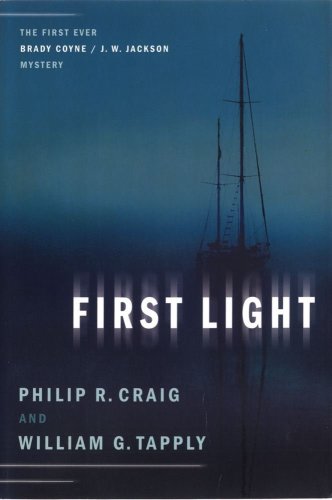 Two veteran writers who know Martha's Vineyard well bring together Boston lawyer Brady Coyne and former cop J.W. Jackson in a slow-paced but ultimately satisfying crime drama set on the island after the summer season has ended. When tough businessman Jack Bannerman's wife goes missing, he hires private detective Jackson to find her. A parallel missing person's case develops when Coyne, Jackson's buddy, arrives for a fishing derby, only to see his elderly client Sarah Fairchild's private nurse vanish mysteriously in the midst of a nasty dispute over the future of ailing Mrs. Fairchild's sizable beachfront property. Conflicts erupt as family members fight among themselves and developers clash with environmentalists, all over whether to have a golf club or wildlife preserve. When he finally speaks with the bumbling local police, Jackson has already noticed that attractive women, all blonde and in their forties, have been disappearing for years on the island. Slashed tires with a warning note and quotations from become important clues that eventually lead the pair of sleuths to a culprit whose guilt has been amply foreshadowed. The first-person narration that alternates between the two heroes for 26 chapters would have benefited from some variety, while the long descriptions of surf casting at morning's "first light" will appeal mostly to those who enjoy that sport. Yet we do get an intriguing and evocative picture of this high-profile vacation spot (whose presidential visits are noted in the text) in the off-season.