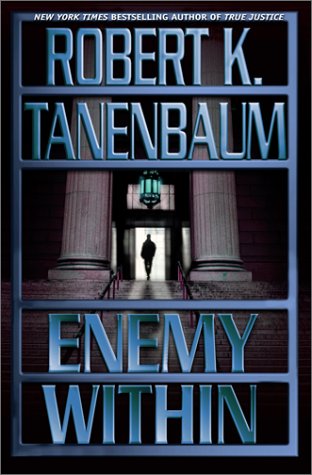 Lawyer and law professor Tanenbaum () brings back his husband-and-wife team of chief ADA Butch Karp and former gunslinger Marlene Ciampi to fight corruption while bringing up their "mutant offspring" in the whirlwind of IPO-era New York City. Opening with two shooting cases Karp suspects are being rammed through "the system" for purposes of political expediency (it being an election year for the DA), the bedraggled-but-upstanding Karp finds himself in a dire situation involving allegations of racism, police conspiracy and potentially misguided use of the newly reinstated death penalty. His spitfire Italian wife, Marlene from Queens, having hung up her guns for a quiet job with a corporate security firm, is swept away on a tide of newfound paper wealth when her company issues a sky-high IPO following a suspiciously well-timed VIP rescue in Kosovo. Meanwhile, their eldest, wayward genius Lucy (who can absorb languages like a sponge), has gotten herself involved in a dicey situation through her charitable work with the homeless when a serial killer begins targeting her charges. Tanenbaum weaves these three main plots (with several subplots attached to each) in a somewhat bewildering pattern of grotesque social inequalities and dirty city politics; while the problems of Karp and his daughter are clearly on a collision course, Marlene provides a form of comic relief via her demented trajectory of reckless spending and alcoholism. The overall story line is more than a bit far-fetched, but fans of Tanenbaum's characters, sharp dialogue and grasp of the intricacies of New York's legal system will not be disappointed.