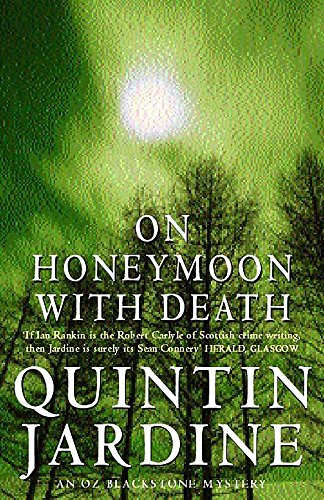 ON HONEYMOON WITH DEATH: An Oz Blackstone Mystery

Scottish author Jardine (, etc.) offers plenty of foul language, treachery and carnal intrigue in this rambling novel, his fifth to feature Glaswegian Osbert "Oz" Blackstone. Oz returns to Spain's Costa Brava with his second wife, Primavera "Prim" Phillips, to resume the idyllic life they had before he left her to marry his childhood sweetheart, Jan, who's now dead. Oz's lottery winnings and budding movie career allow him to buy a fully furnished villa, complete with a swimming pool and a shoddy Russian-make car in the garage. When the pool is uncovered and drained, there's a body at the bottom, perhaps that of the previous owner. Smuggling and money laundering from traffic in white slaves lead to more corpses and violence. Family quarrels and recriminations alternate with descriptions of life among British expats in Catalan country, and their not always easy interactions with the locals. Most of the detection, however, occurs in the book's final chapters, after Oz discovers that Prim has had several casual and serious affairs in his absence. To even the score, Oz welcomes the advances of two lusty beauties while Prim is away. Readers fond of virile Scottish heroes may be the only ones not metaphorically twiddling their thumbs through the long character analyses that precede the book's wife-swapping denouement, which takes place, fittingly enough, in the conjugal bed.