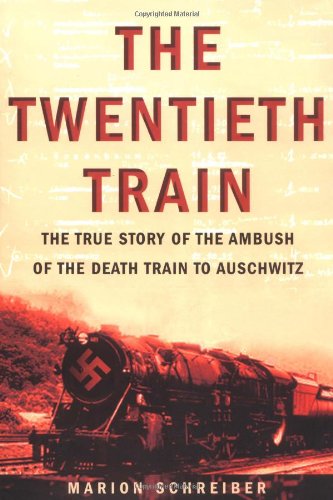 THE TWENTIETH TRAIN: The True Story of the Ambush on the Nazi Death Train to Auschwitz

As authors and historians delve into the details of the Holocaust, they discover that the Nazi killing machine produced a long list of little-known heroes, and here Schreiber, a Brussels-based journalist and former editor at , tells the tale of three such heroes. Armed with only three pairs of pliers, a hurricane lamp covered in red paper and a pistol, the Belgian resistance fighter Youra Livchitz and two friends conspired to pull off the unthinkable: on April 19, 1943, they ambushed a Nazi deportation train headed for Auschwitz and, under a spray of Nazi bullets, managed to free 17 men and women. Not long after, two of the ambushers were caught, tortured and ultimately met their deaths at the hands of a Nazi firing squad. Despite the title, only the last 50 pages or so actually deal with the fateful ambush, an account based on private documents, archival materials and interviews with surviving escapees. The remainder of the book is a detailed account of Brussels, a flourishing city before the war, and its transformation under the Nazi occupation. Although lengthy at times, this background provides a critical framework for the events that follow. Nazi resistance in Brussels, by Jews and gentiles alike, was an extraordinary display of humankindness and courage; such a spirit necessarily grew out of the liberal weltanschauung that had captured the prewar city's imagination. Schreiber's book is both moving and exciting—a celebration of good, rather than a reminder of evil.