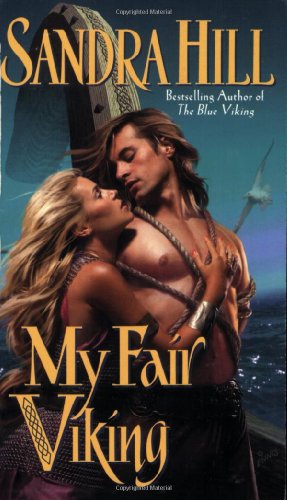 "Two years without a woman, and the first one that arouses me is wearing chain mail and scratching at her groin," Adam, the hero of this bizarre but humorous historical, muses upon meeting Princess Tyra of Stoneheim, a Viking warrior who wants nothing more than to be viewed as "one of the guys." Since the death of his sister, renowned Saxon healer Adam refuses to see new patients, but this doesn't sit well with Tyra, who has come seeking help for her comatose father, King Thorvald. The formidable young woman takes Adam by force to her Norse homeland, where he agrees to try trepanning Thorvald's skull in exchange for a night with Tyra. Tyra, meanwhile, has plans to renounce her birthright and join the Varangian Guard in Byzantium; she's a serious fighting machine who has little interest in marriage, but her four younger sisters are forbidden to marry until she has either wed or left the country. The verbal and physical sparring between Adam and Tyra is delightful, and Hill's () secondary characters—including Adam's single-minded Arab friend, Tyra's scheming sisters and an accident-prone orphan boy—provide comic relief. A singular blend of humor and romance, this breezy read will appeal to fans of Viking romances as well as mainstream historicals.