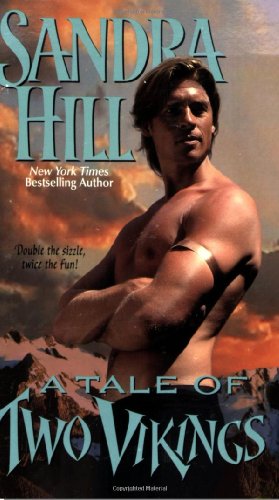 A TALE OF TWO VIKINGS

What do you get when you take two identical twin Vikings, pair them with some feisty ladies and throw in several large servings of absurdity and sex? The newest Viking romance from Hill ( , etc.). Although Hill is known for the fresh, funny, contemporary feel of her Viking romances, readers may overdose on the over-the-top antics she dishes up here. Exiled from their father's estate for their immature ways, Toste and Vagn Ivarsson have joined a band of warring Norsemen in Saxon lands. Just when they decide it's time to grow up and return to their country, a terrible battle finds them separated, each thinking the other dead. The lusty Vikings rebound quickly and soon find themselves chasing after the most unlikely women. Esme, Toste's shapely nurse/novice nun, heats his blood. Vagn, meanwhile, pursues hot-tempered Helga the Homely, the daughter of his Viking rescuer. Vagn lures her into bed many times over, despite her desire to be an independent woman, while Esme and Toste take turns tying each other up and having their way with each other. Each page is bawdier than the next, but Hill doesn't grant her characters much in the way of intelligence. Still, it's hard not to be happy for the "lackwit" Viking twins when they're finally reunited.