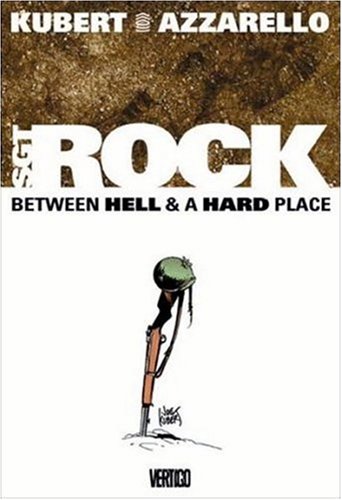 For more than 30 years, legendary comics artist Kubert ( ) drew and occasionally wrote stories for Our Army At War, a war comic chronicling Sergeant Frank Rock and "the combat happy Joes of Easy Company" as they fought their way through Europe during WWII. Kubert's stark, mood-saturated drawings set apart as a classic. After many years away from the character, Kubert has teamed up with Eisner Award–winning writer Azzarello ( ) to produce an impressive and often moving graphic novel that showcases the development of Kubert's powerful, understated drawings. It's 1944 and Easy Company is battling through the Hürtgen Forest toward the German town of Grosshau. Out on patrol, the men of Easy Company—among them Bulldozer, Ice Cream Soldier, Wildman and Little Sure Shot—take four SS officers prisoner. But after the fighting, they return to their prisoners only to find that three of them have been murdered, shot at point blank range. The fourth prisoner has disappeared, forcing Rock to solve a murder mystery: is the killer from Easy Company, or is it the vanished officer? Azzarello contributes a fine script, taut with looming danger and the fatalistic humor of soldiers facing combat. Sadly, the ending (Rock and the killer banter while a beautiful French woman looks on) seems contrived and disappointing. Nevertheless, this is a terrific war yarn that conveys some measure of the grim courage and despair of American WWII infantrymen.