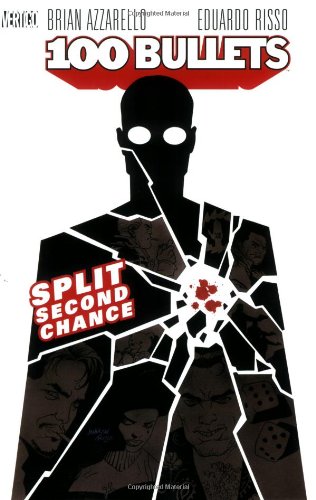 In the world of , moral ambiguity comes packed in an attaché case with a gun, one hundred untraceable bullets and positive identification of the person responsible for ruining your life. Gimmicky, perhaps, but not necessarily a bad premise for the high melodrama of noir. However, in this instance it quickly runs out of gas, undercut by clichéd characterizations and absurd plot contrivances. Dizzy Cordova is a young, recently paroled ex-gangbanger whose husband and baby have been killed in a drive-by. Lee Dolan is a drunken bartender whose family and career fell apart after he was framed for peddling child porn. Both are offered a chance at revenge by a pair of mysterious agents whose motivations are as obscure as their origins. Riffing off ghetto stereotypes and corny street slang instead of a convincing plot, Azzarello's story lines offer up half-processed notions of greed and betrayal, with a little violence and tawdriness thrown in for good measure. To be fair, this volume collects just the first five issues of an ongoing and complex narrative series. But the book's real pleasures can be found in the drawings of artist Eduardo Risso, whose shadow-filled, stylized renderings of urban anomie manage to convey unexpected nuances of emotion. Risso's drawings, coupled with the subtle, muted palette of colorist Grant Goleash, give the work an engaging visual moodiness that the clunky narrative is unable to match.