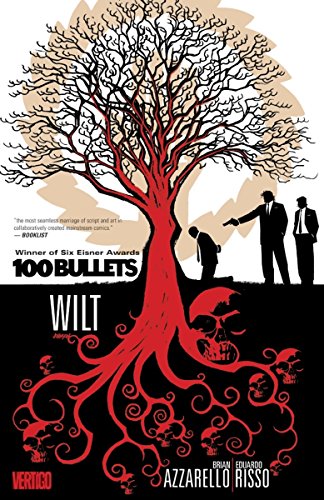 The final collection of Azzarello and Risso's 100-issue crime comic book crushes its grand construction into Grand Guignol as the series concludes in an inevitable bloodbath, with its high society cabals, sleeper assassins and no-one-is-innocent bystanders blowing each other to smithereens in the name of hollow revenge. Azzarello's writing serves his thematic purposes (the endless reverberations of violence in American culture), and his punchy, vernacular dialogue glistens with vulgar brio. Where stumbles, oddly, is its often scattered and distracted plotting, which blunts its impact. Some crucial plot points breeze by with only a baffling allusion, while others get driven home with a jackhammer. By midway, Azzarello's tone has gone fully manic, as his characters brutally destroy themselves in the hope of bringing some pain to their enemies. What never falters, though, is Risso's artwork. He juggles the book's enormous cast, densely packed action sequences, subtleties of facial expression and acrid noir atmosphere with aplomb, balancing spidery line work with monumental, jagged chunks of negative space, augmented by Patricia Mulvihill's twilit earth-tone palette. Even as the story crumbles—the final scene, fittingly, is in a burning, collapsing building—its images are scaldingly vigorous.