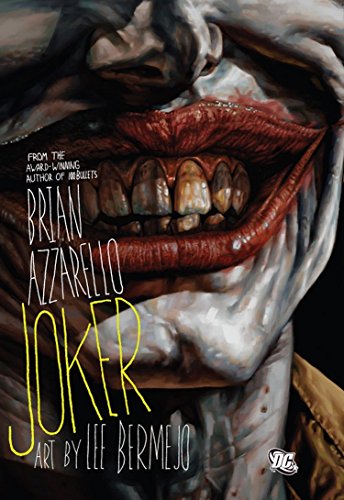 Building on Heath Ledger’s performance in (although long before the movie’s debut), Azzarello creates a memorably cringe-worthy story. Rather than a natty Clown Prince of Crime, this Joker looks like a glam rocker gone to toxic seed. Newly released from Arkham Asylum, he begins disorganizing the criminal establishment of Gotham City. Although he claims to want power and money when he confronts Two Face and his peers, he really seems just to enjoy playing with people—shooting them, setting them on fire or skinning them alive. Accompanying him is Jonny Frost, a young thug who takes a long time to recognize the drawbacks of seeing a vicious sociopath as a role model. Like Jonny, however, readers may find that, horrifying as the Joker is, they can’t take their eyes off him. Even Batman, when he inevitably enters the action, functions largely as the Joker’s partner in a dance of death. Azzarello has learned how to create a menacing, morally ambivalent atmosphere in his years of scripting , and Bermejo’s jagged, shadow-saturated art sustains the mood. The result is fascinating but extremely dark.