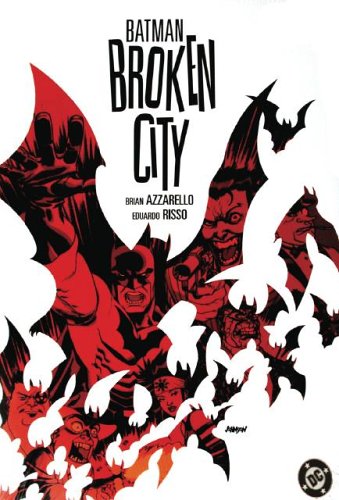 , reprinting a recent run of the Batman monthly, turns the Dark Knight over to scripter Azzarello and artist Risso, the team behind the nail-tough crime series 100 Bullets. Though initially eye-pleasing, it's not much fun to read. The bewildering plot, concerning a murder investigation and a fistful of villains old and new, involves little method and much mayhem, all set to our hero's voiceover musings—a hard-boiled narration that strains after effect. Azzarello's Batman is a frankly repulsive figure, terrorizing and torturing his victims, moving among crooks like an old, incestuous acquaintance. Yet despite his encounters with thugs, cops and victims, he remains essentially alone. Predictably, he obsessively replays the scene of his parents' murder—Batman's primal scene—in familiar, Frank Miller-esque fashion (the usual traumatic montage). Azzarello ignores the character's larger-than-life, Shadow-like grandeur, offering instead a crudely sadistic vigilante; worse yet, he forgets to humanize the very people for whom Batman supposedly undertakes his mission. As in 100 Bullets, Risso's art is an eye-stopping consolation, blending noir-ish chiaroscuro and crisp, clear-line elegance (with nods to Miller and Tim Sale). Though Risso's breakdowns can be perplexing, in general the images are sharp and startling, compensating to a degree for Azzarello's unremitting bleakness, while partaking of the same grim attitude. In sum: graphically enticing, but confusing and, finally, repellent.