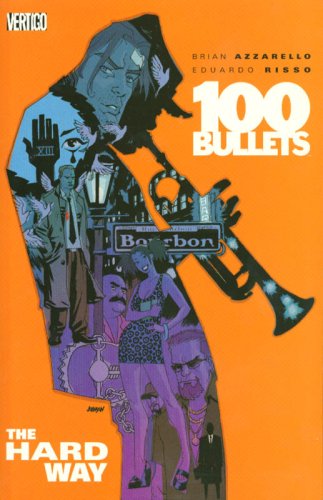 This Eisner Award–winning series continues its exploration of contemporary American noir through its ingenious gimmick: mysterious Agent Graves offers a gun and 100 untraceable bullets to those who are looking for vengeance. This outing starts in a seedy dive in the French Quarter of New Orleans, a city with dark underbelly to spare. A showdown is brewing between story regulars and one-time allies Graves and Wiley Time, a young man seeking his own, not necessarily firearm-related brand of vengeance. Things rapidly get ugly, and not a little confusing, when Wiley walks into the bar, looking for a way out of the ugly direction his life is headed. Before the story's over, much killing takes place, as a dark cabal that's been in the background since the series began attempts to keep tabs on who's shot whom. Risso's art is the perfect foil for Azzarello's dark, sexy story; sunshine is seen only as a reflection in a puddle of beer on the bar, and beauty is as fleeting as the jazz of an innocent trumpeter who exits the tale in a particularly poignant (and painful) way. Although the complicated back story makes this a hard book to jump into, the glorious, relentlessly dark mood will reward those who stick with it.