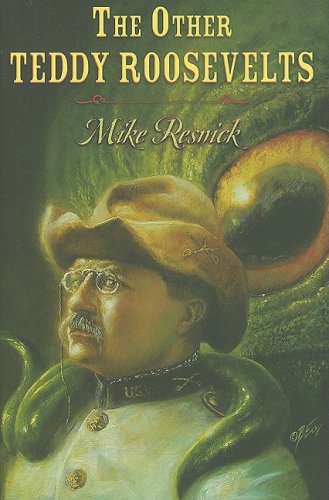 The Other Teddy Roosevelts

Comprising seven of Resnick’s alternate historical tales of Theodore Roosevelt, this slim collection easily takes the prize for narrow selection criteria. The best-known story is “Bully!” nominated for multiple awards following its 1991 publication, while the two most entertaining are arguably the two most recently written: 2001’s “Redchapel” and 2007’s “Two Hunters in Manhattan,” which respectively pit Roosevelt against Jack the Ripper and a vampiric New York crime lord. “The Bull Moose at Bay,” “Bully!” and “Over There” all find Roosevelt in futile and rather unflattering opposition to the forces of history, and “The Light That Blinds, the Claws That Catch” serves as an oddly ambivalent coda. A choppy appendix of Roosevelt facts and anecdotes largely copies from the smoother, more concisely biographical introduction. Those with special interest in Roosevelt or Resnick ( ) will find the collection well packaged, but for general readers, there isn’t enough material to justify the high price.