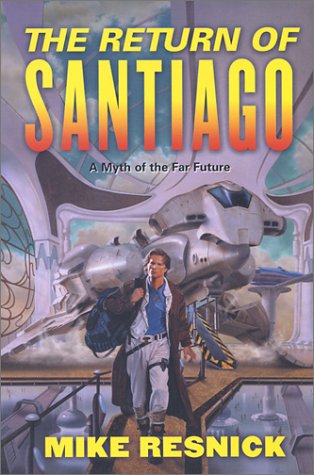 THE RETURN OF SANTIAGO

In this planet-hopping Old West romance, the sequel to (1986), Nebula and Hugo winner Resnick tries hard to capture the grandeur of old American folktales, but the narrative's flat, unadorned style, salted though it is with period diction and dialogue, is sometimes at odds with this ambition. More than a century after the disappearance of legendary outlaw Santiago, small-time crook Danny Briggs stumbles across the manuscript of an epic poem that chronicles the deeds of the scourge and savior of the galaxy's Inner Frontier. Recognizing Santiago's true nature, Danny struggles to resurrect the revolutionary whose crimes masked a complex scheme to protect the lawless Frontier from the corrupt justice of the Democracy, the major human state. Adopting the name Dante Alighieri, he decides to continue the poem, updating it with the new heroes and villains who duel in the dusty streets of isolated settlements sprinkled over hundreds of worlds. With words as his chosen weapon, Danny/Dante (aka the Rhymer) takes on the roughest bandits and the deadliest gunslingers, hoping to find one who can fill Santiago's space boots. Pecos Bill and Wild Bill Hickok would feel right at home with such characters as Tyrannosaur Bailey and the One-Armed Bandit. Seekers of space-age sagebrush need look no farther.