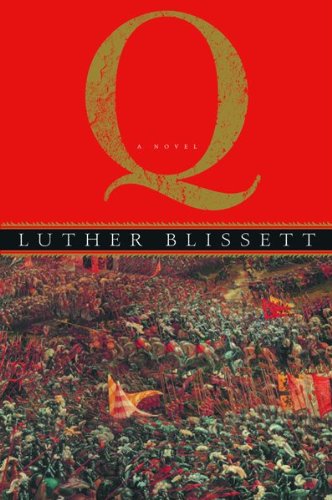 Rich religious history is turned into bloated, tedious fiction in this Reformation-age epic produced by four anonymous writers lurking behind a pseudonym. In 1517, Martin Luther nails his 95 theses to the door of Wittenburg Cathedral. In 1525, a one-time theological student, a radical Anabaptist who goes under a number of names over the course of the narrative, but who is initially called Gustav Metzger, pulls off the first of a number of hairbreadth escapes from heretic hunters keen to spill the blood of any would-be supporter of Luther. For the next 30 years, even as Protestantism slowly makes inroads across Europe, Metzger is tracked by a papal spy who, traveling incognito under the eponymous moniker Q, keeps his boss apprised while he and his compatriots attempt to crush the movement on behalf of the Vatican before the schism widens. Needless to say, they fail. Translator Whiteside has done the best he could with the material: stripped-down chapters breathlessly composed of short, snappy paragraphs ("The girl smiles. She's extremely beautiful") alternate with epistolary passages given a faux-historical gloss. Speech anachronisms abound throughout, especially when events are related by Metzger and company (" 'What the fuck did you say? What? So you're not dead, but you scare me anyway, pal, you scare me'"), and most of the characters sound so alike that not only do they remain lifeless on the page, they are often indistinguishable from one another. A good amount of historical research is lumped throughout, but the period stylings are wooden and the story never gains enough momentum to carry readers along.