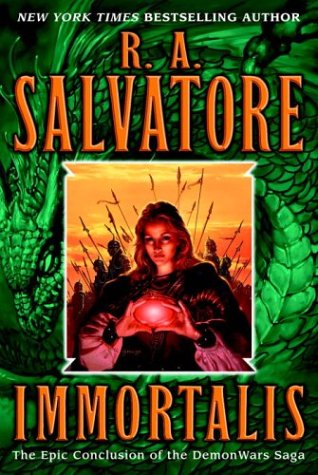 Bestseller Salvatore brings his second DemonWars Trilogy to a credible if predictable conclusion, shifting from Behren, a land rocked by religious crises and internal warfare in the previous volume (2002's ), to the neighboring kingdom of Honce-the-Bear. Young King Aydrian Boudabras, encouraged in his ambitions by oracular visions, works to stabilize his shaky throne in Honce-the-Bear and consolidate his hold over both regions. His almost supernatural charm and intelligence, as well as his impressive skill with magical gemstones, seem to be enough to win Aydrian not only these prizes but also leadership over the powerful Abellican Church with the aid of Abbots Olin and De'Unnero. The forces arraying themselves against his efforts are impressive, however, including Jilseponie, his mother and a powerful gemstone-wielder in her own right, and the combined kingdoms of the Touel'alfar and Doc'alfar elves. Aydrian's character is developed almost too well, as shown in his abrupt and unconvincing awakening from demonic possession. At least some of the major characters appear to be properly dead by book's end, though with Salvatore's penchant for zombie-raising and narrow escapes, one never can tell. His legions of fans will certainly snap this one up, but it's unlikely to make any converts.