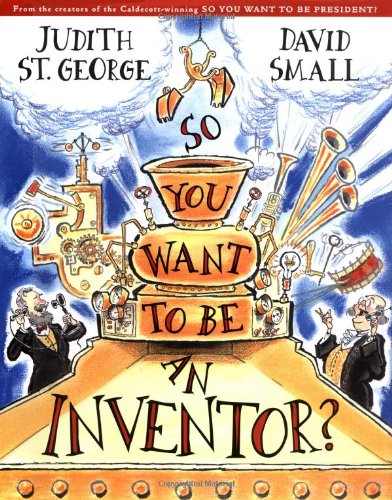 SO YOU WANT TO BE AN INVENTOR?

With a lighthearted style similar to the collaborators' Caldecott Medal-winning , this volume furnishes brief sketches of inventors and inventions both famous and little-known. As she did in the earlier volume, St. George invites readers into her exclamation point–studded narrative and introduces many of the clever contraptions with snippets of advice: "If you want to be an inventor, be a dreamer" and "Don't worry if people laugh at you." The latter remark leads into mention of "Fulton's Folly," Robert Fulton's widely mocked steamboat: "But the laughter lost steam in 1807 when Robert's chugged up the Hudson River from New York to Albany with paddle wheels churning and flags waving." Some readers may miss the kinds of details that tantalizingly cluttered the pages in the previous volume (here, Alexander Graham Bell's invention gets one paragraph: "When he grew up, he dreamed of people talking across distances—maybe by electric signals. Electric signals it was!", leaving Small with less fodder for his portraits). Still, she includes intriguing tidbits, such as the fact that glamorous actress Hedy Lamarr, who fled Austria before WWII, worked with a friend to invent a system for guiding torpedoes by radio signals ("Her goal? Beat Hitler!"). Humorous touches infuse Small's illustrations (for Franz Vester's invention of a coffin with an escape hatch, the artist shows a hand reaching out of the grave as guests depart the funeral); readers will particularly cotton to his caricatures of such luminaries as Benjamin Franklin and Thomas Jefferson. All ages.