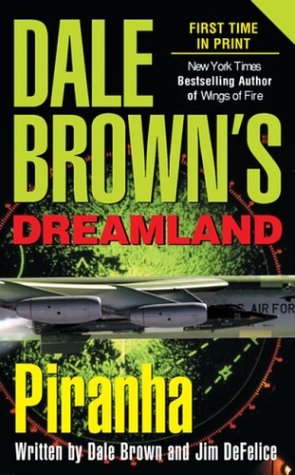 This brisk, if conventional, entry in Brown and DeFelice's jargon-filled series of military thrillers (, etc.) takes a team of high-tech pilots from Dreamland, an aerospace weapons-testing facility, to sea. Piranha, an underwater robot capable of surveillance and attack, opens its career by outmaneuvering a Naval carrier. It quickly graduates from the testing phase, however, when a crisis in the China sea erupts and a Dreamland team—including Col. Dog Bastian, his daughter Capt. Breanna Stockard and her husband, wheelchair-bound Zen Stockard—is assigned to keep an eye on the goings-on between India and China. The simple mission heats up when the Dreamlanders get into a fray with the Chinese, who are anxious to test some secret machinery of their own. The authors describe each advanced weapon in such detail that readers, had they the tools, could conceivably build their own arsenal. Though these details bog down the narrative at times, the story thankfully slams into overdrive midway through. All in all, the book's overwhelming number of acronyms may discourage new readers, but fans of the series should have no complaints.