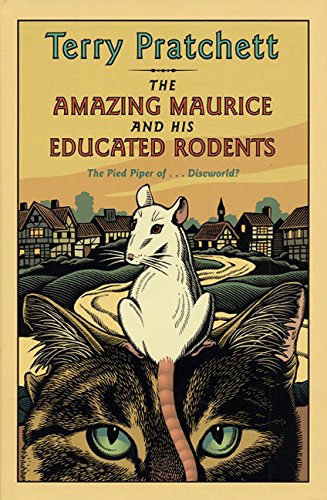 THE AMAZING MAURICE AND HIS EDUCATED RODENTS

For this outrageously cheeky tale, British writer Pratchett pairs a dynamite plot with memorable characters—a group of intelligent rats sporting such monikers as Hamnpork, Big Savings and Darktan (they've been foraging in the University of Wizards' garbage dump and come up with "the kind of name you gave yourself if you learned to read before you understood what all the words actually meant"), plus a "stupid-looking kid" with a flute and a criminal kitty mastermind named Maurice. The motley con artists' pied piper scam is highly successful—until the rats develop a conscience. Reluctantly, they agree to one final heist, but in the town of Bad Blintz things go horribly, hilariously wrong. First, they're twigged by Malicia Grim (granddaughter and grand-niece of the Sisters Grim), then they encounter a pair of conniving rat-catchers, a real pied piper and an evil something lurking in the town's cellars. They triumph, of course, and there's even a glimmer of redemption for the deliciously self-centered Maurice, who tackles the "Grim Squeaker" and bargains for the life of his rat comrade Dangerous Beans. In the end, while the others settle down, Maurice hits the road and is last seen approaching another "stupid-looking kid" with a money-making proposition. Could this mean more tales to come? Readers will eagerly hope so. Ages 12-up.