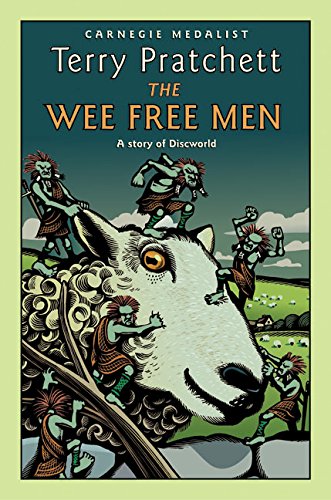 The latest adventure set in Pratchett's sprawling, free-form Discworld boasts a winning heroine, the plucky young witch-in-training Tiffany Aching. Funny, sassy and spirited ("She preferred the witches to the smug handsome princes and especially to the stupid smirking princesses, who didn't have the sense of a beetle"), the heroine turns what might have been a simple adventure yarn (although nothing Pratchett does is ever simple, really) into an enthralling and rewarding read. What's not to love about a teenage girl who takes on vicious monsters, armed with only a frying pan? Her bravery will win over not only readers but the Wee Free Men of the title, the Nac Mac Feegle—puckish, (somewhat) lovable imps who exude a certain charm despite their innate and unrepentant kleptomania. The Nac Mac Feegle come to Tiffany's aid when her younger brother Wentworth is kidnapped; the ultimate showdown between Tiffany and the cold-hearted Queen of the Elves transpires as a joyous triumph of innocence over cruel ambition. As always, Pratchett weaves eminently quotable morsels (a person-turned-toad warns of the perils of fairy godmothers: "Never cross a woman with a star on a stick... they've got a mean streak"), into his artfully constructed prose. Some of the characteristically punny humor may pass over the heads of younger readers, but plenty of other delights will keep them hooked. Ages 12-up.