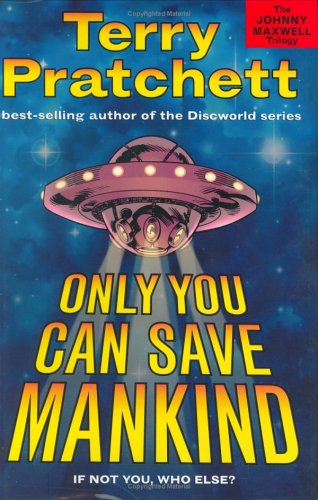 Only You Can Save Mankind

Released in Britain in 1992, just after the first Gulf War, the launch title in Pratchett's Johnny Maxwell trilogy reaches American shores in the midst of current conflicts in the Middle East. A whimsical but ultimately unsettling "war game" conceit drives the book: what if video games weren't just games? Teenager Johnny plays video games (pirated copies from a friend) to escape the "Trying Times" that his parents are going through and the bombs dropping in the Middle East every time he turns on the television. But one afternoon while Johnny is playing the game Only You Can Save Mankind, the alien ScreeWee fleet from within the game surrenders to him, an action that is outside the game's parameters. The hero begins to dream himself into the game space and pledges to help give the ScreeWee safe passage to avoid slaughter by the human gamers. Johnny has less success convincing his friends of what he's doing, except for a proficient gamer, Kirsty, who is motivated to win at all costs. Pratchett's wartime allegory is apt, if frequently heavy-handed ("Do you think the pilots just sit there like... like a game?... We turn it into games and it's not games"). Still, the compelling premise and Pratchett's humorous touches (such as the aliens' frustration with human attackers who "die" and just keep coming back) may well attract fans to this trilogy. Ages 8-up.