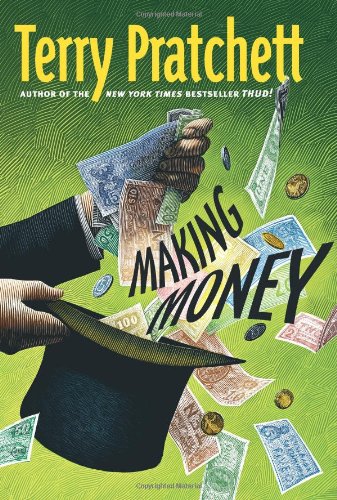 Reprieved confidence trickster Moist von Lipwig, who reorganized the Ankh-Morpork Post Office in 2004’s , turns his attention to the Royal Mint in this splendid Discworld adventure. It seems that the aristocratic families who run the mint are running it into the ground, and benevolent despot Lord Vetinari thinks Moist can do better. Despite his fondness for money, Moist doesn’t want the job, but since he has recently become the guardian of the mint’s majority shareholder (an elderly terrier) and snubbing Vetinari’s offer would activate an Assassins Guild contract, he reluctantly accepts. Pratchett throws in a mad scientist with a working economic model, disappearing gold reserves and an army of golems, once more using the Disc as an educational and entertaining mirror of human squabbles and flaws