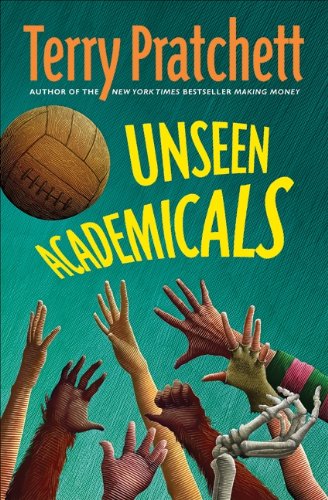 Football, food, fashion and wizards collide in Pratchett’s 37th Discworld novel (after 2007’s ), an affectionate satire on the foibles of sports and sports fans. The always out-of-touch wizards at Ankh-Morpork’s Unseen University stand to lose a very big bequest unless they enter a team in a violent but popular street sport competition. As the wizards struggle to learn the game, aided by the university’s hired help, Ankh-Morpork’s ruler schemes to use the competition for his own purposes. Though the book suffers from a few awkward moments (Pratchett’s attempts to discuss racism through the strained relationships of dwarves, humans and goblins fall particularly flat), the prose crackles with wit and charm, and the sendups of league football, academic posturing, and cheesy sports dramas are razor sharp and hilarious but never cruel. At its heart, this is an intelligent, cheeky love letter to football, its fans and the unifying power of sports.