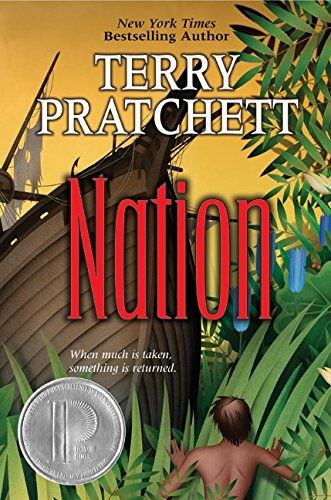 In Carnegie Medalist Pratchett’s (the Discworld novels; ) superb mix of alternate history and fantasy, the king of England, along with the next 137 people in line to the throne, has just succumbed to the plague; the era might be akin to the 1860s or ’70s. As the heir apparent is being fetched from his new post as governor of an island chain in the South Pelagic Ocean, his daughter, the redoubtable Ermintrude, still en route to join him in the South Pelagic, has been shipwrecked by a tsunami. She meets Mau, whose entire people have been wiped out by the great wave (he escaped their fate only because he was undergoing an initiation rite on another island). She and Mau each suffer profound crises of faith, and together they re-establish Mau’s nation from other survivors who gradually wash up on shore and rediscover (with guidance from spirits) its remarkable lost heritage. Neatly balancing the somber and the wildly humorous in a riveting tale of discovery, Pratchett shows himself at the height of his powers. Ages 12–up.